The Dunwoody Perimeter Chamber will host Georgia Deputy Commissioner, Lee Thomas, of the Film, Music, & Digital Entertainment Office at a membership luncheon on Wednesday, October 16, 2019, at 11 a.m. at Fleming’s Prime Steakhouse & Wine Bar. During this event, Thomas will address and the Dunwoody community at Fleming's Prime Steakhouse & Wine Bar on Wednesday, October 16, 2019, at 11 a.m. During her keynote address, she will discuss the role of the film industry on business growth in Georgia.

A native Atlantan, Lee graduated from Marist School and then went into the Radio -TV -Film program at the University of Georgia. She received a Bachelor of the Arts in Radio -TV -Film from UGA, and returned to Atlanta to earn Master’s Degree in Film Studies from Georgia State University. In 1992, she entered the Tisch School of the Arts Doctoral Program in Cinema Studios at New York University, then began a job at the Brooklyn Arts Council. She returned to Atlanta in 1996 to work for the Georgia Film and Videotape Office as a project manager, and then became a location specialist for the office in 1998.

After finding locations for film and television projects for 12 years, Lee became director of the film division in 2010, and was then promoted to Director of Film, Music & Digital Entertainment in 2011. Films that Lee has worked with include The Hunger Games: Catching Fire, The Blind Side, Midnight in the Garden of Good & Evil, Footloose, Fast 5, The Conspirator, and Zombieland.

“As a student at Marist, I spent quite a lot of time in Dunwoody—I am looking forwarding to joining the Dunwoody Perimeter Chamber to talk about Georgia’s exciting role in the film industry,” Thomas said.

After advance registration ends, no walk-ins will be permitted; no refunds will be given for cancellations or no-shows. There are still sponsorship opportunities available for this event; please visit here for more information.

This event is sponsored by the DeKalb Entertainment Commission and the City of Dunwoody. 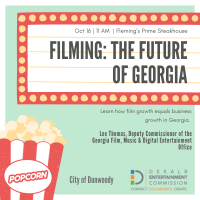