The Dunwoody Perimeter Chamber hosted a ribbon cutting to officially welcome Wallis Bank to the Dunwoody community at 11 a.m. on Thursday, June 20, 2019. The celebration was held at their location at 1710 Mount Vernon Rd., Dunwoody, GA, 30338.

Although they joined the Chamber in Wallis Bank began operations in a wooden frame building where it remained until 1912, before a two-story brick building was erected. The Board of Directors leased portions of the second floor to the justice of the peace and a Masonic lodge. This building served as the bank’s home for the next 46 years until the present building was constructed in 1968, which replaced the old two-story structure. There have been a number of major modifications to enlarge the main office, as the bank has grown and expanded over the years.

On June 14, 1976, the bank became a member of First City Bancshares. In 1989, the bank became a member of Louise Bancshares. During that time, C. J. Overgoner, William R. Jenkins, and Michael Turner served as presidents of the bank. After new ownership took over the Bank in the early 1990s, the Bank has expanded by opening branches and offices in Houston, Dallas, San Antonio, Fulshear, and Los Angeles. In 2019, the bank officially updated its name from Wallis State Bank to Wallis Bank.

The goal of Wallis Bank is to continue to provide quality financial products and services with an irreplaceable personal touch that has been developed through more than a century of experience.

“The Chamber is so happy to have Wallis Bank be a part of the Chamber family and the Dunwoody community. Their presence here also adds value to the Perimeter Market, providing an additional banking option for those who live, work, and play in Dunwoody,” Stephanie Freeman, Chamber President & CEO said.

Following the ribbon-cutting ceremony, attendees enjoyed light bites with water, tea, and sodas. There were also giveaways (small promotional items). The event was free to attend and open to the public. 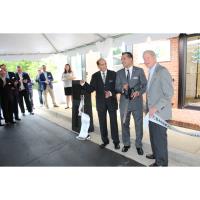