A RESOLUTION IN SUPPORT OF PERIMETER PARK

WHEREAS the State of Georgia and Georgia Department of Transportation are investing approximately $800 million in two projects to improve the Interstate 285 and Georgia 400 interchange and collector and distributor road system serving the interchange and surrounding area (collectively the "Project");

Whereas Governor Nathan Deal has stated the Project "is a crucial economic engine, providing valuable access to jobs, supporting business growth, and expanding Georgia’s role as a major logistics hub for global commerce.";

WHEREAS the Central Perimeter District has over 134,000 jobs within the District;

WHEREAS the Central Perimeter District has over 29 million square feet of office space, making it the largest office submarket in Metro-Atlanta;

WHEREAS the Central Perimeter District has over 5,500 multifamily residential living units within the District, with a population of over 10,500 living in the District;

WHEREAS the Central Perimeter District has over 3,000 multifamily residential living units approved for future construction;

WHEREAS the Central Perimeter District has over 11 million square feet of commercial retail space;

WHEREAS the Central Perimeter District has over 3,500 hotel rooms, with additional hotel rooms under construction;

WHEREAS the Perimeter Community Improvement Districts have developed a Commuter Trail Master Plan which states "is primarily focused on aiding commuter trips by increasing the utility of MARTA for Perimeter workers and residents, the improvements recommended herein will also benefit commercial trips by providing better non-motorized access to areas shops and restaurants. The network of bicycle and pedestrian facilities can serve recreational purposes as well, adding to the quality of life for Perimeter’s increasing residential community and providing an amenity to help employers attract and retain top talent.";

WHEREAS the Perimeter Improvement Districts have developed a plan in partnership with the City of Dunwoody that identifies the approximately 5.5 acres under the Dunwoody MARTA Station and elevated rail line that would serve as a park known as Perimeter Park;

WHEREAS the stated reason international and national corporations such as State Farm have decided to locate to the Perimeter Area is to take advantage of the live, work and play lifestyle design standards to meet workforce demands;

WHEREAS the City of Dunwoody Land Use Plan provides the Perimeter Center Character Area vision is "[t]o create a 'livable' regional center with first-class office, retail and high-end restaurants in a pedestrian and bicycle-oriented environment that serves as a regional example of high quality design standards.";

WHEREAS the Dunwoody Perimeter Chamber states "Dunwoody is a well-situated, vibrant, fun place to live, work, and visit, and it’s different from any other place in the Metro Atlanta region. There’s something about this convenient lifestyle that draws young singles, established professionals, growing families, and empty-nesters to create a thriving community.  To accommodate the future growth of Dunwoody, the city is working to incorporate the latest thinking on how the physical space of our community is created, focusing efforts on enhancements to livability and creating a unique sense of place. These concepts include mixed-use development, transit-oriented development, smart growth, and green building design.";

WHEREAS the Metropolitan Area Rapid Transit Authority (MARTA) Board has endorsed construction of Perimeter Park as it supports increased ridership and TOD development around Dunwoody Station;

WHEREAS there are no parks in the Central Perimeter District excepting parkland on its eastern edge abutting a single family residential district;

BE IT RESOLVED that the Dunwoody Perimeter Chamber for the purpose of advancing job growth, business retention, business attraction, quality of life, and improved economic conditions, DOES HEREBY respectfully request the City of Dunwoody pursue securing the rights to the land known as Perimeter Park and develop policies to allow for the construction of Perimeter Park consistent with the foregoing goals, objectives and policies. 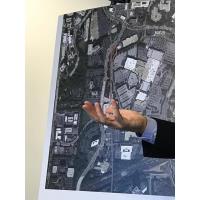